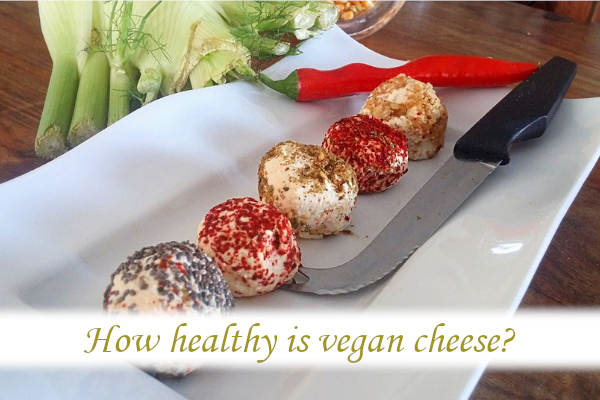 Also, Why is vegan cheese so expensive?

Most vegan cheeses are a healthy way of avoiding traditional dairy cheese and the concerns over consuming animal proteins and fats. Not to mention the issues regarding growth hormones. Avoid highly processed vegan cheeses as these may contain processed seed oils that are bad and may affect your health.

Vegan cheeses that have a short list of ingredients that are put through a traditional ageing method of maturing are usually the best.

Vegan cheese is made from vegetable products. There are few, if any, routine vegetable products that are not healthy in a diet. But, for all of that, it wouldn’t be wise to eat just vegan cheese. If you include it in your disciplined, healthy, vegan diet, you need to consume in moderation, just like anything else.

Some argue that if something is labelled vegan, that this doesn’t necessarily mean that it’s healthy. In the case of vegan cheese, we are attempting to mimic traditional cheese that’s made from animal milks. Typically this would involve cow’s milk but there is also goats, sheep and buffalo milk available.

These are all healthy products and it can be safely argued that they are nutritious. But they don’t fit in with the ethos of those who object to using animal products. The components that go into vegan cheese are vegetable proteins as opposed to animal proteins.

When we look closely and compare the two types of cheese it’s important to note that where we can say that vegan cheese is healthy, we have to be aware that there are elements of traditional dairy cheese that will be missing. This shouldn’t lead anyone to feel that vegan cheese is in any way unhealthy but you may find it necessary to include elements that are missing from the dairy version from another source.

How healthy is vegan cheese?

One such element is calcium. This is required for healthy bones and teeth. There is some calcium in vegan cheese but the amount is very small  compared to that of dairy products.

The question shouldn’t be about whether vegan cheese is healthy or not but more to do with the nutritional value of what we are eating. People have been consuming cheese that’s been made from traditional dairy products for millennia. There doesn’t appear to be any data to suggest that this practice has ever been unhealthy.

Achieving a healthy vegan diet will always be a challenge when we consider that we need the level of nutrition that we have traditionally taken for granted when consuming dairy products.

If you are considering switching from traditional dairy cheese to vegan cheese, you need to know that finding a substitute for the cheese that you’ve known for most of your life, won’t be easy.

Vegan cheese shouldn’t be consumed as a singular health food. If you’re convinced that you need to take steps to avoid animal dairy products by going vegan, only allow vegan cheese to be part of your overall healthy diet.

If we take the view that vegan cheese is a healthy substitute for traditional dairy cheese, we can’t really let this go by without questioning the perceived health issues of dairy cheese and dairy products generally.

Let’s look at some of what is being said on the internet about traditional dairy cheese and the claimed health issues surrounding it.

Should we see traditional dairy as being unhealthy?

There has, of course, been lots of research into the health implications of consuming dairy cheese and many other animal products which have been consumed for millennia. At the top of all the health issues there is a claim that dairy produce consumption can be tied to some types of cancer. Other diseases are being laid at the door of dairy products including type 2 diabetes.

There has been research that’s been carried out for over two decades which appears to show that one of the proteins in dairy products, casein, may be responsible for  increased growth of cancer cells. Further to this it has been claimed that women who eat the most dairy cheese may suffer a higher than 50% increased incidence of breast cancer. This has been put down to dairy products containing growth hormones.

Added to this there are those who have health problems due to being lactose intolerant. This particular group experienced an almost immediate benefit to their health when they cut out dairy cheese and other dairy products from their diet.

All of these claims need to be considered in a much wider context. It seems wrong to lay the blame for any illness at the door of a particular component in any food that we eat when there are so many factors which can cause underlying health issues. If these underlying health issues aren’t taken into consideration, possibly because they haven’t been properly identified, then it makes any research almost nonsense.

It’s only in recent times that claims have been made of there being health problems with dairy products.

It’s easy to understand why people want to deviate away from animal products due to ethical reasons. But when you make decisions that involve changing your diet, you need to take a number of things into consideration, mainly to do with nutrition. Everyone needs to have a healthy diet.

Before committing to any radical change to your diet, you need to have an understanding of how nutrition works and, more importantly, how such changes may impact on your health in the long term.

Why is vegan cheese so expensive? 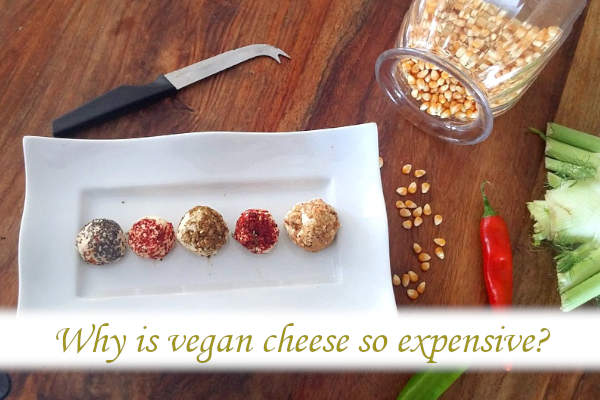 We also have to accept that dairy milk products benefit from production subsidies. This makes dairy products less expensive. Vegan cheese and vegan products generally are not being subsidised in any way.

Then we have to accept that the ingredients that are needed to make vegan cheese tend to be more expensive, for example cashews and almonds.

Why is vegan cheese so expensive?

There is also the added complication of vegan cheese being categorised along with non-GMO and organic produce. This is done to attract more customers to buy vegan cheese. The downside being that organic and non-GMO products have to be used when making vegan cheeses which are always way more expensive than standard non compliant ingredients.

One solution to the issue of expensive vegan cheese is to find a good recipe and make your own. There are lots of recipes online and if you hunt around you may be able to find ingredients that are not so expensive.

Another option is to look out for bargains. There may be occasions when certain types of vegan cheese are on sale at a discounted price. That’s the time to move in and bulk-buy because most vegan cheeses can be stored by freezing.

In some cases there are some vegan products which are sold on an own-brand label. Generally products that are sold by the larger retailers as an own-brand tend to be less expensive. This is something that we may see more of in the future.

The vegan diet is seen as something new, niche and, to some people, it may appear as being an exclusive way of life. When high-profile celebrities explain that they are vegans, this is likely to raise the profile of the vegan diet.

On social media, images are often posted of meals that have been prepared using vegan ingredients. Those who use this method are very often influencers who want to raise the value of the market for these products. Where this is successful, it often leads to an inflated sense of value of what you are looking at.

When you make the decision to convert to a vegan diet, this may be the most expensive time because you will be buying all sorts of vegan foods to begin, what is most likely to be, something of an experiment.

You will be trying out lots of new things to see what works for you. You will be buying vegan cheese, vegan pies, vegan mince and vegan steaks. Because you will be in an experimental ‘new world’, you will probably buy more than you actually need or you may find that some of the foods that you buy just don’t suit your taste, although some new foods may ‘grow’ on you.

This phase is likely to be an expensive time. Especially if you only set your sights on buying from specialist suppliers which tend to be more expensive. There may be a cheaper way of getting into the vegan habit by buying basic vegetables together with beans, pulses and other basic foods. These ingredients are always going to be less expensive than meat.

There are things you can do to make a vegan diet less expensive, here’s some ideas:

Here’s what some people think:

“Vegan cheese has a small market compared to cheese made from traditional Dairy Milk. We have to accept that vegan cheese is an artificial substitute of what is generally considered to be the genuine article. This will always be a problem when it comes to pricing. The mass produced products that fill the main market will always be cheaper. The Vegan lifestyle, whether we like it or not, is a lifestyle choice of a minority who have their own good reasons for doing so. We, therefore, have to accept that when we want to buy products that fit in with veganism, we have to be prepared to pay a premium.”

“Vegan cheese is more expensive because of a number of simple reasons. The market for vegan products generally is smaller so it’s difficult to achieve economies of scale when producing anything that fits in with the Vegan ethos. Another reason is that some vegans just can’t eat vegan cheese because they can’t manage the taste; it just doesn’t work for them.  This means that some vegans who should be buying vegan cheese aren’t doing so which means that the market size is even smaller, therefore the price has to be higher. The manufacturing of vegan cheese requires a lot of processing. This involves more people who have to be paid which will inevitably lead to a higher price.”

“Vegan cheese is a niche product and relatively new in the market. It has to compete with traditional dairy cheeses which can be produced much more cheaply because mainstream agriculture is subsidised. If these subsidies were removed traditional cheese would become more expensive unless it were to be imported from countries where it can be produced cheaper. Vegan products will always find it difficult to be less expensive than foods that come from subsidised agriculture. The production of vegan cheese won’t be subsidised. This is what makes vegan cheese so expensive.”