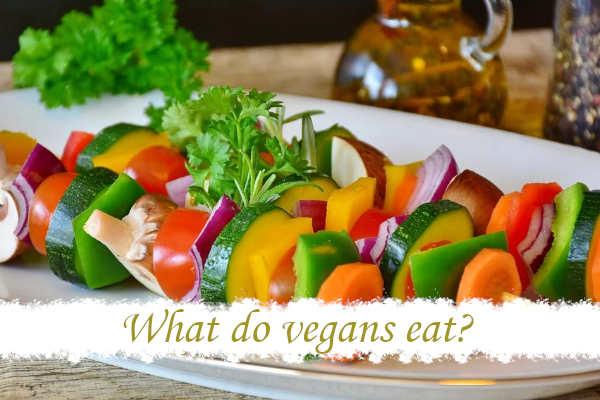 What do vegans eat on a normal day?

What do vegans eat that are substitutes for meat?

Vegans eat plant-based foods. There’s a whole list of foods that can be imaginatively produced from plants that vegans eat. Let’s go through some of the basic plant-foods that are used when preparing a diet for vegans:

Nuts and seeds for vegans to eat

What constitutes a nut or seed? Nuts can be viewed as the fruit of a plant. They are also the seed of the plant from which they come. The hard shell around a nut doesn’t impede the sprouting process unless they are harvested and stored away from any source of moisture.

Seeds are similar to nuts in that they are plant generated and offer the opportunity of generating continued growth in the form of new generations  of plants. Both nuts and seeds are an ideal fit for vegans as they’re fully plant-based.

Some nuts can be ground into a very passable flour which can be part of tasty recipes that vegans eat.

There’s a list of seeds that vegans eat as seeds or the oils that are extracted from them.

Vegans tend to keep convenient containers of all the nuts and seeds that they eat, in their recipes, close to hand so that when a recipe is being prepared, a selection can be easily added.

Vegans eat any type of bean. Beans are, of course, plant-based and provide all that’s required for vegans and their strict regime of what they eat. Beans are legumes and are one of the best sources of vegetable protein. Beans grow in pods and, in some cases, the pod can be eaten along with the beans. Typical beans or legumes that vegans eat include:

There’s another group that comes under the category of legumes that vegans eat and that is pulses. These would include all types of lentils and chickpeas.

This is an ideal source of plant-based protein for vegans to eat. It’s known to be high fibred with a range of vitamins and is understood to have probiotic properties. Not only do vegans eat tempeh, it’s seen as an alternative to meat which puts it in the region for vegetarians to eat as well.

Tempeh is derived from soybeans but it’s not unusual to add other beans, grains and other flavourings. The tempeh process involves cooking the soybeans followed by a fermentation before being compressed into a solid block. This can then be sliced for vegetarians and vegans to eat.

Asking: what do vegans eat?

Seitan is a relatively new but growing favourite among vegans. It’s derived from wheat and described by some as ‘whitemeat’. The wheat input mustn’t deceive anyone into thinking that this is bread. When cooked and fully prepared, it has a similarity to meat, in appearance and feel.

As for the taste, vegans, who eat this, describe it as being savory. If compared to any meat, the general view is that it’s like chicken or mushrooms.

Derived from soy milk, this is another of the best sources of protein that vegans eat. It’s also seen as a viable replacement for meat that would fit into a variety of plant-based dishes that vegans can eat. Tofu has caused some confusion among some vegans because it’s also known as ‘bean curd’. A term that leaves it with dairy connotations.

It’s important to note that pure tofu is made from soy milk that coagulates into a cheese. The process of making this cheese is similar to that of making dairy cheese but that is where the similarities end. Vegans can have confidence in eating this.

Another top-ranking source of protein for vegans are lentils. Vegans find this particular pulse easier to cook than most other bean and pulse foods. They don’t need to be soaked and it’s possible to cook up something with lentils in less than 25 minutes. Split lentils will cook much faster, taking about 5 minutes.

It’s not just about what vegans eat. There are milks.

Plant milks in a vegan diet

There’s a glorious range of plant milks for vegans.

Seaweed is being described as a ‘nutritional pillar’ for vegans. It contains a list of elemental components that are needed for a viable diet that excludes meat. These include: potassium, magnesium, iodine, calcium and zinc.

Nutritional yeast is mainly used in vegan dishes as a flavouring for some of the, it has to be said, bland components that have to be used to fit with what vegans eat. It can be called nutritional because it’s often fortified with a range of elements that compensate for deficiencies in certain areas of a vegan’s diet.

The fortification of nutritional yeast would typically include Vitamin B12 together with potassium, folate and iron.

Fermented plant material takes us into the world of probiotics and a way to improve digestion. Many take the view that this type of food can have medicinal properties that can prevent inflammation among other ailments.

There’s nothing more plant-based than whole grain food. Vegans eat anything made from wheat, including seitan; the wheat gluten, rice, brown or white and quinoa. All of these have a measure of protein, although varied, that will contribute to a vegan diet.

There’s been some debate as to whether mushrooms are animal or vegetable but the matter appears to be settled. Mushrooms are a fungus and that places them in a category on their own. There’s been some suggestion that some fungi eat animals. There may be occasions where certain types of fungi live on animals as skin parasites but mushrooms don’t come anywhere near this.

There isn’t a huge amount of food value in mushrooms but they carry a taste that works with most dishes that vegans like to eat.

All fruits and vegetables for a vegan diet

This is the base of a vegan diet. All inputs for vegans must be plant-based and this will include all types of fruit and vegetables. Most of the nutrients that we need can come from a vegan diet of fruit and vegetables. However, the message needs repeating that there may be a short-fall of needed elements which include calcium, iron and vitamin B12.

What do vegans eat on a normal day?

What do vegans eat for breakfast

Much of the diet that vegans eat is made up of fruit and vegetables. This provides a high fibre plain of nutrition with an intake of vitamin C and folate. This, however, restricts vegans from a range of other vitamins and minerals. One essential vitamin that vegans miss is B12. In non-vegans this vitamin is provided, in abundance, from meat, milk, eggs and cheeses.

It may be possible for vegans to gain vitamin B12 from breakfast cereals that have added vitamins from a suitable source but most vegans resort to taking B12 in a supplement form.

What do vegans eat for a vegan snack

Soya yoghurt appears to be a favourite for vegans to take as a snack. Eating little-and-often is part of the vegan mantra but there has to be something of value in whatever vegans eat.

What do vegans eat for a vegan lunch

Here’s a range of lunch choices that vegans turn to, which we’ve discovered. As you would expect, salads make up a high proportion of what vegans eat.

What do vegans eat for a vegan dinner

The vegan dinner is a chance to top up with a variety of foods that contain much needed proteins. A solid range of high-protein vegetables will help with this and provide a source of iron in a vegan diet.

What to look for when shopping for vegan food

What do vegans eat that are substitutes for meat?

There are substitutes for meat,fish and poultry that vegans eat

In the 1960s a meat substitute was developed that today’s vegans can eat. It was and is known as Textured Vegetable Protein (TVP). Its base-compound is soy flour which has been left over from the soy oil production. The process involves using solvents to remove fats, leaving a high-protein, low-fat material.

This product from soy flour can then be formed into shapes that can resemble meat.

Seitan can produce a meat substitute

Seitan is wheat gluten which is the protein component in wheat. A passable meat-form can be achieved by mixing water with wheat-flour to dissolve out the starch. The remaining wheat gluten or seitan can be shaped into a firm and chewable material that has some flavour but it can be enhanced by the addition of soy sauce or other marinade flavourings.

You can buy a usable form of seitan, for vegans, in supermarkets. It’s generally available as slices or chunks. Seitan provides a high source of vegetable protein. It’s low in carbohydrates and holds a good measure of iron.

Vegans can use mushrooms as meat

Many consider that mushrooms have a meat flavour due to the umami factor which gives them their savory flavour. A favourite for this is the large portobello mushrooms which can be treated almost like a slab of meat which can be boiled, grilled or cut up and fried.

Mushrooms, although ideal for vegans, are low in protein. They have few calories but are high in fibre.

The jackfruit can be found growing in South East Asia, Africa and Brazil. The flesh of jackfruit is firm enough to be likened to the meat of chicken or pork. The flavour of unripe jackfruit is almost non-existent which leaves it open, like a canvas, that can be filled with flavours of sauces and seasonings that fit the desired taste.

Described as having a stringy texture, jackfruit are popular when plied with barbecue sauce. All of this is good news for vegans. The unripe jackfruit can be sliced and, when cooked, will provide a very passable meat substitute.

Ripened jackfruit performs differently. As with most fruits when they ripen, jackfruit will taste sweet and can be eaten as a dessert.

Substitute meat with beans and other legumes

Beans and legumes are plant-based proteins that needn’t cost too much. There’s a wide range of beans to choose from, all of which fit with the vegan profile and often make up a large part of what vegans eat.

Some experimenting may be necessary when selecting beans for specific recipes. It’s a question of which beans go with which added flavourings in the full cuisine of the day.

It needs to be pointed out that vegans can get a good source of plant-based protein from beans and legumes but they don’t provide some needed amino acids. On the plus side they provide a source of available iron and they are high in fibre.

Meat substitutes are available for vegans to eat. Here’s a selection of brands to look out for but they may not all be in your region.

What do vegans eat that improves health?

Are there health benefits from eating vegan?

No one here can speak with authority on this but asking around, there’s advice to be had from those who claim to know.

Here’s what we’re being told:

“ Most of the nutrients we need can come from a balanced vegan diet but all vegans need to consider taking supplements. This may be particularly so when acquiring vitamin B12.”

“To get the right level of nutrients from a vegan diet does require planning. Focus on including foods that contain Calcium, Iron and vitamin B12.”

To find out more about the benefits or otherwise of the vegan diet and what vegans eat, see what the NHS (in the Uk) have to say on the subject.